Why did the UK transfer anti-tank weapons to Ukraine. Russian tanks in the Donbas The UK has supplied Ukraine with several thousand advanced light anti-tank missiles to defend against a potential full-scale Russian aggression. This was announced on January 19 by the UK Minister for the Armed Forces, James Heappey.

“We’ve sent thousands of defensive light anti-armor missiles to the Ukrainian Armed Forces … Ukrainians are a proud sovereign nation, and they’re ready to fight for every inch of their country ,” said Heappey. 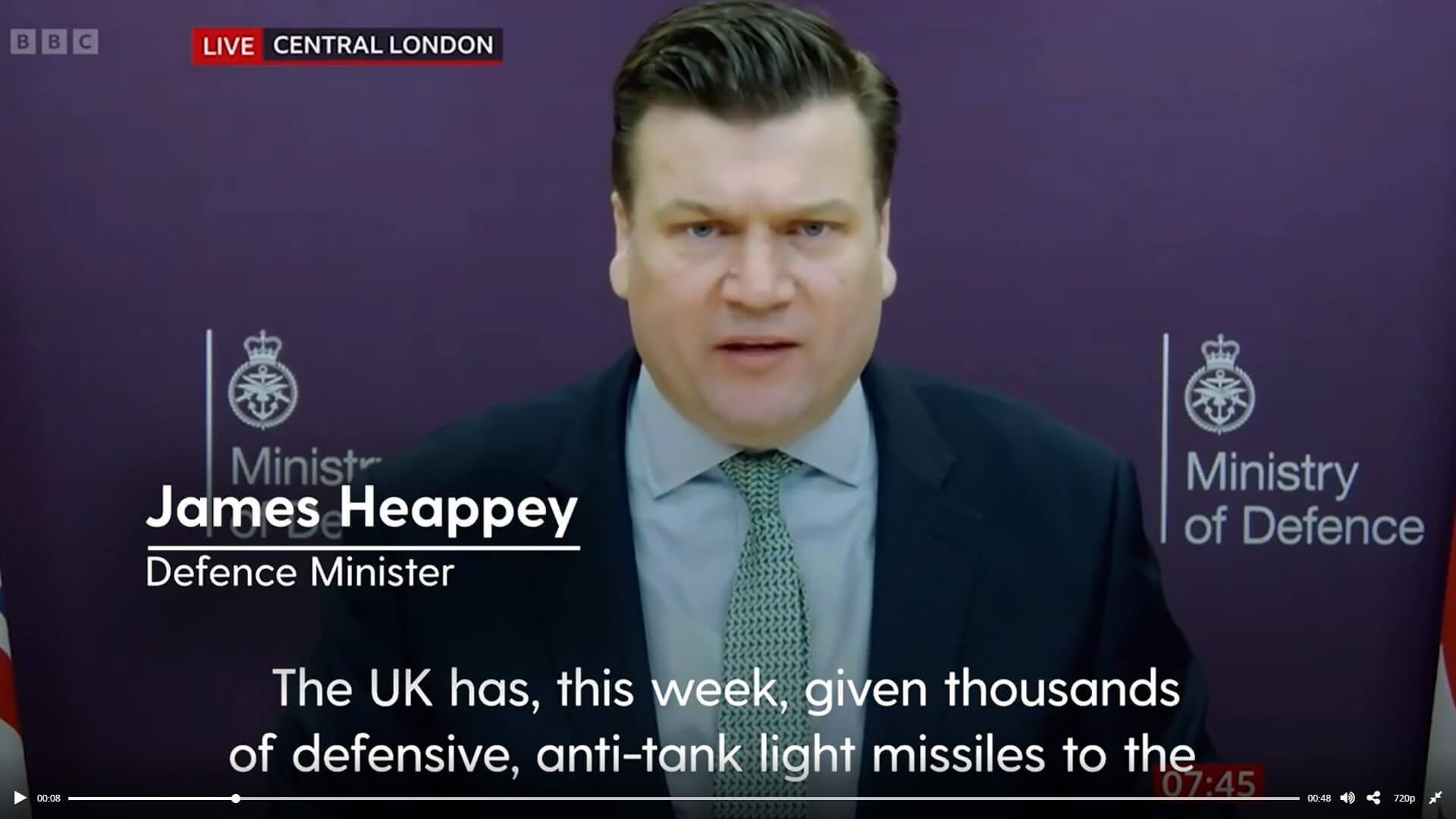 Such prompt action by the UK is a clear political signal to the Kremlin that the UK will stand by Ukraine in the face of Russian aggression. And the very nature of the weapons and the political signals sent to Moscow demonstrate the desire of the United Kingdom to keep the Russian military-political leadership from making the irreparable mistake of creating a new round of bloody war in Europe.

As an instrument of deterrence, on January 18, several British military transport aircraft delivered to Ukraine modern Swedish portable anti-tank guided missile systems NLAW, which are considered among the best in the world in the class of light portable anti-tank weapons. The report of the arrival of the military cargo was broadcast by Ukrainian military television.

While monitoring the Russian segment of the Internet, volunteers of the InformNapalm international intelligence community noticed that throughout the day of Tuesday, January 18, Russian media and Telegram channels were tracking the arrival of aircraft in Kyiv with the Flightradar24 service and while falsely claiming that London was transferring British weapons and troops for aggressive actions against Russia. Distortion and projection are typical Russian propaganda techniques that the misrepresent the situation in Ukraine for the domestic Russian audience. Russia pretends to be a victim, even though both the occupation of the Ukrainian Crimea in 2014 and the subsequent hybrid Russian aggression in the Donbas demonstrate that it is the Russian Federation that is waging a vile and aggressive war against Ukraine.

While Russia periodically deploys more and more types of offensive weapons, including tanks, MLRS and Iskander-M operational-tactical missile systems, to the borders of Ukraine under the pretext of military exercises and maneuvers, Ukraine’s allies are supplying anti-tank deterrence weapons, US ATGM FGM-148 Javelin and Swedish NLAW).

According to hundreds of OSINT investigations by InformNapalm, since 2014, Russia has used at least seven different modifications of main battle tanks in its military operations against Ukraine in the Donbas. Five of them have never been in service with the Ukrainian Army, and their presence is direct evidence of covert deliveries from Russia.

Moreover, numerous facts of the participation of Russian Army tank crews using the equipment of their own units in battles on the territory of Ukraine have been recorded. Some of these soldiers died or were seriously injured when their tanks were destroyed by Ukrainian anti-tank systems.

The database of OSINT investigations of the InformNapalm international intelligence community contains evidence of the use of uniquely Russian types of military hardware in hostilities in the Donbas. These types of weapons have never been in service with the Ukrainian Army, therefore, they could not have been captured in battle. Russian modifications of T-90A and T-72B3 main battle tanks are among these types of weapons.

On September 3, 2014, on the territory of Luhansk Oblast, locals recorded a convoy of Russian military equipment consisting of 25 vehicles. Two T-72B3 tanks and other vehicles were identified in the convoy.

According to the data about Russian weapons in the Donbas collected in the Ukrainian section of Wikipedia based on OSINT investigations of the InformNapalm international volunteer community, postings of investigative blogger @ Askai707 and other media reports, it is known that in the battles near Ilovaisk in August 2014, the Ukrainian military destroyed several T-72B3 tanks of the 6th Armored Brigade (6th AB, military unit 54096) of the Russian Army. In the summer of 2014, the battalion tactical group of the Russian invasion forces of the 17th Motorized Rifle Brigade (military unit 65384) was also equipped with T-72B3 tanks. And in the August battles near Luhansk, Russian 200th Motorized Rifle Brigade (military unit 08275) also operated T-72B3 tanks. T-72B3 tanks were also used by the 6th Brigade in the battles for Debaltseve in the winter of 2015. British journalist and pro-Russian propagandist Graham Phillips also accidentally showed a convoy of these tanks in the village of Sanzharivka. It is also known about one destroyed Russian T-72B3 tank in winter battles near Debaltseve close to Vosme Bereznia village.

Russian T-90A tanks have also been repeatedly spotted in the Donbas. Tanks of this modification were filmed in the area of the railway crossing close to the village of Lyse near Novosvitlivka (Luhansk Oblast) in August 2014.

The photos found by InformNapalm  OSINT investigators in the profile of Russian serviceman Vitaly Marakasov in October 2014 provide one of the clearest proofs of the Russian military invasion. The photo above shows a whole column of Russian T-90A tanks of the 136th Motorized Rifle Brigade (136th Motorized Rifle Brigade, military unit 63354 ) of the Russian Army moving along a dirt road in the area of Fabrychne village near the Luhansk Airport. This photo also appeared on the cover of the Donbas in Flames guide book, prepared by the Prometheus Security Environment Research Center. 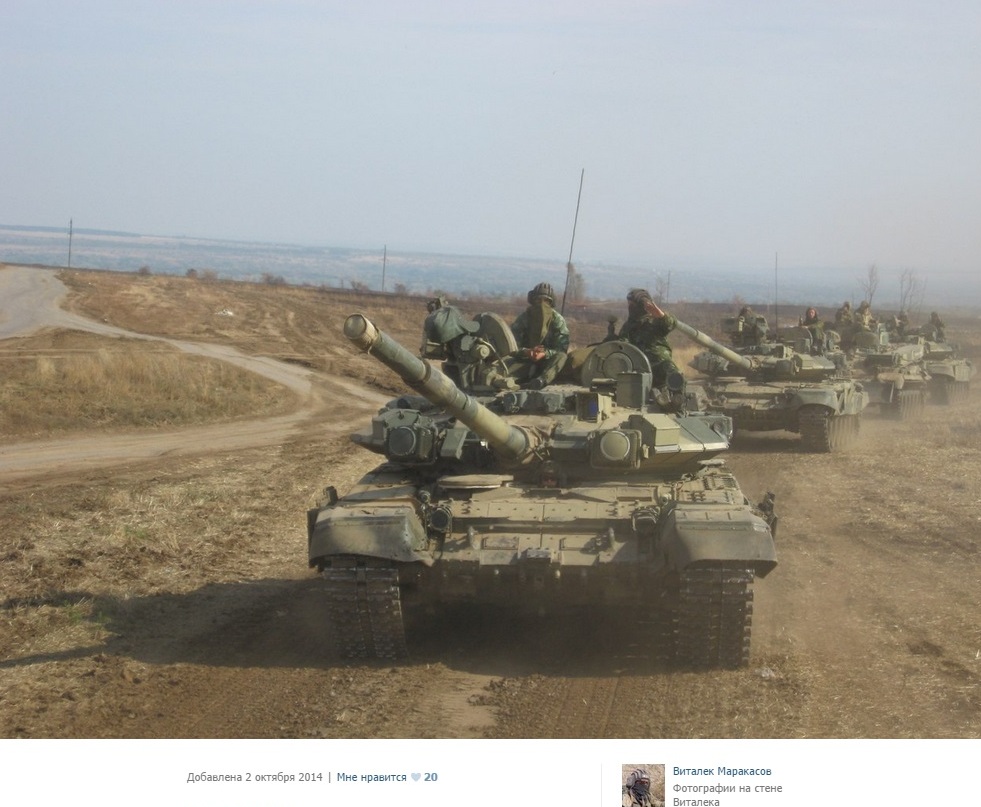 Thus, the decision of the UK to supply a new batch of modern anti-tank systems to Ukraine is due solely to the desire to contain the next round of Russian aggression. This decision was clearly made based on an analysis of the experience of active offensive military operations that Russia carried out in eastern Ukraine in 2014-2015.

Russia spends huge amounts of money on propaganda, the main purpose of which is to distort the existing reality and facts. The Kremlin is trying to convince the Russians and residents of the Ukrainian territories occupied by Russia of the aggression of Ukraine and NATO, whipping up hysteria and panic, and wreaking havoc to achieve its military-political goals.

The real reasons for Putin’s hysteria are probably the fear that his aggressive plans and intentions to take over Ukraine will fail. As of December 2021, the majority of Ukrainians support the course towards Ukraine’s accession to NATO, and this percentage is increasing every year against the backdrop of Russian aggression. The Ukrainian society and the Ukrainian Army continue to demonstrate high motivation and readiness to continue resistance and defend their territory from invasion. This motivation deserves respect and is reinforced by the political, economic and military support of many of the world’s successful democracies. It is the path of Ukraine, which is supported by many countries of the world, and it is perceived by the Kremlin as a threat. Because a successful democratic and free Ukraine is, first of all, an example for both the citizens of the Russian Federation and the citizens of Belarus, that only by freeing yourself from the collar of the Kremlin and overthrowing your dictator can you build a free and democratic state.